May Means Variety and Lots of Action

The month of May is here and it offers a nice variety of fish and good fishing.

The last few trips of April produced some nice fish for our customers. One trip, we had a group of hockey players from Canada who joined us for a full day trip. I made sure we had plenty of live goggle eyes and pilchards onboard before leaving the inlet. That morning, I decided to start our day a little north of Port Everglades. We started fishing in 100' of water and caught s few kingfish, and then the kingfish bite stopped. I decided to fish some local wrecks between 100' and 150' where we managed to catch a few amberjack. Halfway through our trip we headed out a little deeper and found very good action and with lots of mahi - most of them between 10 to 15 lbs. In the end, everybody had a chance to reel in some nice fish. 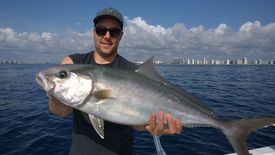 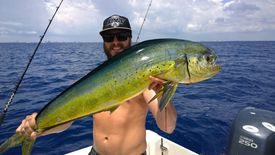 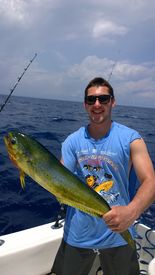 Next, we were joined by Stephane Bellucci and his son Luca for two half-day fishing trips. As we headed out the inlet I asked them if they ever fished in saltwater before and their answer was yes - a lot. So now I was under some pressure to produce. I went to work North of Port Everglades and started in 200' near the Steeple. We had a nice north current and in a short period of time the first bite was on a flat lined pilchard. It produced a 20 lb. blackfin tuna for Luca. Then a goggle eye on the kite was hit and this time it was a sailfish for Stephane. We took the time to take picture and released the fish healthy. Then we moved shallower and caught a kingfish. We also tried bottom fishing and caught an amberjack and a big black grouper. Again, due to the season closure, we released the fish after a quick picture. 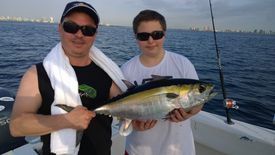 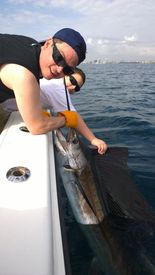 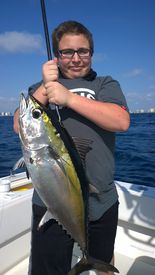 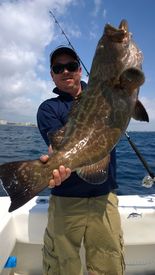 The last three trips, we fished north of the inlet and had good success. The last trip, I decided to go south of Port Everglades and found a good kingfish bite in 100' feet and green water. We later tried going deeper, but with no bite, came back inside and got rewarded with a hammerhead shark who took a live goggle eye on the kite. And later, another hammerhead shark took one of our deeper goggle eyes. So we had a double header and a first time shark for our customers. So overall, fishing is good and the tuna are starting to show-up off Fort Lauderdale and Hollywood areas. So, let's go catch a few. 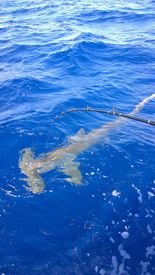