We fished Ft. Lauderdale 5 days this past week and all of them half day trips. On Tuesday morning, before leaving the inlet, we bought 3 dozen live pilchard and went south of Port Everglades but could not find blue water so we fished green water in-between 200' to 100'. We ended up catching lots of bonito and 1 kingfish. 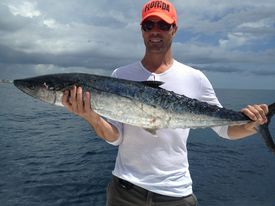 On Wednesday morning, we fished with a couple from Paris and a father and daughter from Montreal and this time we went north between the steeple and Hillsboro inlet. We started in 180' and our first fish was a bonito. With the current going North, I decided to move shallower, and in 150' we caught a nice amberjack on a weighted line. The kite also produced a 22 lb. kingfish and a nice 16 lb. blackfin tuna. Later, we added one more 20 lb. king on a deeper pilchard. 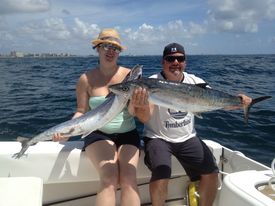 On Thursday, our trip was late afternoon from 4 to 8 with some special guests from Star Brite . This time I had a mix of pilchards and goggle eye and went north looking for blue water and found some a little south of Hillsboro inlet in 180'. Right away we caught some small mahi on pilchard and caught an 18 lb. barracuda on a weighted goggle eye. With time running out, and no wind, I moved in to 140' and put a helium balloon on the kite with live Pilchard and 2 deep goggle eyes and 2 pilchard on flat line. We ended up with a double header sailfish - 1 on the kite and one on the flat line. What a great catch to end our trip! 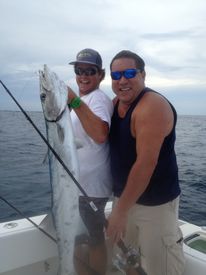 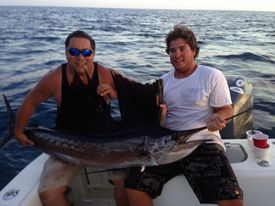 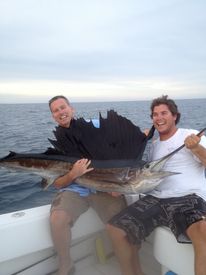 On Friday, we fished with Erick and Marie Pierre Fortier - their first time blue water fishing, but fishing was tough. The day's tally was a couple big bonito and Erick caught a nice 18 lb. kingfish on a pilchard. 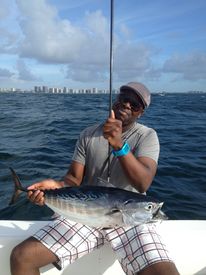 On Saturday, Dennis, his 6 years old daughter Valentina and his 10 year- old nephew Gabriel asked me to anchor - so I anchored in 30'. We put out live shrimp on small spinning outfits and in no time we were catching yellowtail and a variety of small fish. We also put out a pair of live pilchards on flat lines and caught 3 nice cero mackerel. Ten-year-old Gabriel caught a nice mutton snapper on a bottom rig with a live pilchard. For the last hours we moved deeper in 120' and miss a fish right away and then missed another one and finished the morning with an exciting 50 lb. blacktip shark! 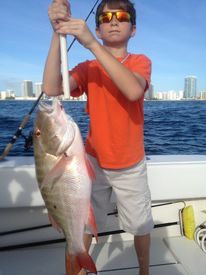