In my last report, I talked about a new costumer that tried saltwater fishing for the first time and caught a hammerhead shark and a sailfish. I also mentioned that I fostered some new saltwater anglers for the future. Well, I was right, they enjoyed their first saltwater fishing trip so much, they called me back that same night and ask me if I had any openings in the next few days. I told them I had one morning time slot available, but it was going to be cold and the water will be choppy. I also told them the fishing should be good, with a cold front coming through and a north wind, I knew we had a good chance at sailfish.

So, before going out the inlet we stopped by the bait boat and bought a dozen goggle eyes for our morning trip and headed directly north of Port Everglades. We stopped by the Steeple and set up in up in 125' with a north current and a north wind. I figured this is going to be great morning, so I put out the kite first with 2 goggle eyes and I waited before putting the other deeper baits. I wanted to conserve our baits because I sensed it would be a busy morning and didn't want to run out of bait.

It took about 15 to 20 minutes to get our first bite and it was a sailfish. After a short, but exciting battle, we got the fish to the boat, took a few quick pictures and released the fish. As if on cue, a nice mahi then took the other goggle eye left alone on the kite. 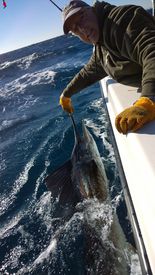 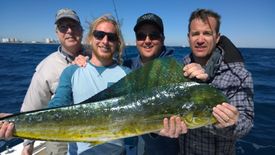 Everyone was enjoying our quick success, while I repositioned and setup again in that same depth. This time with 2 kite baits and a flat line. In no time, we had 3 sailfish on - we got all 3 of them at the boat. We were all excited and exhausted - including me. 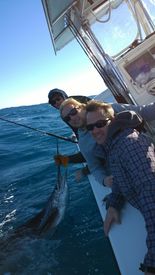 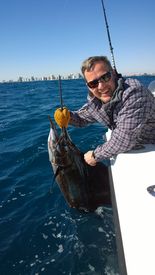 Our bait supply was running low. I had to re-rig the kite rod, so I put out 1 flat line first and immediately hooked another sailfish! The bite was hot with a north current and good conditions. 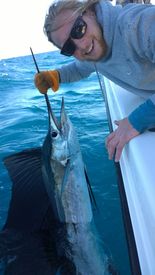 Stephane, Simon, Sylvain and Robert ended up with 5 sailfish released, a nice mahi and a big silky shark. For two half-day trips in one week they, were rewarded with some pretty nice catches: a total of 6 sailfish, 1 hammerhead shark, 1 big silky shark and 1 nice mahi. It's so nice to spend time on the water with nice people who really enjoyed themselves catching some of the most beautiful fish we catch here in Fort Lauderdale, FL. 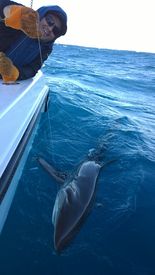