Fishing out of Port Everglades in the Fort Lauderdale and Hollywood area around Thanksgiving week was really, really good and most of our trips resulted in some pretty good action.

One trip I remember with repeat customer started very slow. We started with our live baits like we always do, we had a live goggle eye on the kite and some deep one as well. But after 2.5 hours, we only had a silky shark and another missed bite. As we were drifting, I noticed some small minnows under the scattered weed patches. At this time of year, this usually means tuna so I decided to give it a try. We trolled the area for an hour and it produced 14 blackfin tuna and a nice mahi. It was an exciting 60 minutes and all 4 of my customers were really happy, with big smiles all around. 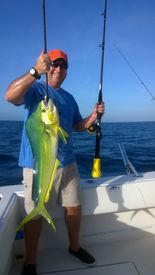 The next day, another repeat customer who visits us 4 to 5 times a year told me he was bringing some of his best friends who had never experienced saltwater fishing. They expressed great interest in trying to catch a sailfish - my reply was, we'll try our best.

With a south wind at 15 to 20 knots and a north current, I decided to go south of Port Everglades. We found only dirty water nearshore, so I decided to go deeper. We managed to find some nice blue water in 500' with lots of flying fish. Conditions were not optimum, but our best chance at a sailfish would be found here. I started with 2 live pilchards on flat lines. Next, I put up the kite and the first goggle eye to hit the water was inhaled by a waiting sailfish. The fish began jumping immediately and the battle was on. After 30 minutes, we had fish at the boat and took some quick pictures. The fish was released unarmed and healthy. 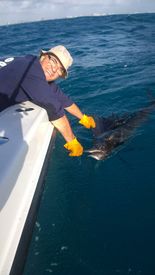 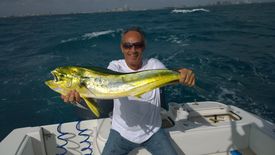 Afterwards, we caught a few mahi, a few silky sharks, but missed 2 wahoo bites on the kite baits. With 45 minutes left and time running out, I decided to put out 2 more goggle eyes, but this time we were in dirty water in 180'. The gamble paid off with a second sailfish release and some really happy customers.

That same day in the afternoon, we had another fishing trip and I decided to go in the same direction, south of the inlet, but this time we started in 400'. Again, the first goggle eye on the kite produced a sailfish, but this one got away after a 15 minute fight.

The next day we fished with a father and is 2 boys. They too wanted to catch a sailfish, but this trip our kite baits never got hit. Instead, our flat lined pilchards produced a few mahi. Later, we trolled some jigs around some big ships anchored near the inlet. We caught 6 big blue runners to bend the rods for the kids. You have to love that it doesn't take a "glamour" fish to put big smiles on their faces. Take a kid fishing! 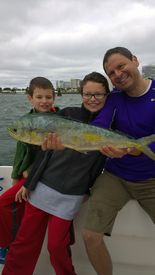 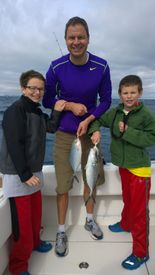