Fishing the offshore waters of Fort Lauderdale and Hollywood the past week has been very good. Action of the area reefs has not been as good, but not bad.

Andre, who travels from Canada to join us a couple of times each year, had a good trip last Friday morning. We left the inlet with 2 dozens goggle eyes and started fishing by the Steeple, on top of a wreck. We've been fishing this area a lot lately and our first 2 baits produced a kingfish and a nice rainbow runner. The bite was so good we fished only 2 to 3 baits at the time. With a 15 knot NW wind, we put 2 baits on the kite and 1 weighted bait. Drifts produced more kingfish in the 10 lb. range and a few silky sharks. We then we moved in deeper water in 350' and caught a nice hammerhead shark, about 150 lbs. on one of the kite baits. After releasing the fish at the boat, we decided to move again, but this time to 450' where we found good action catching a dozen mahi - releasing most of them, but kept 2 for dinner. 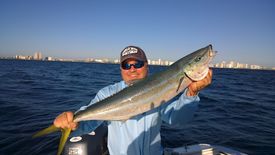 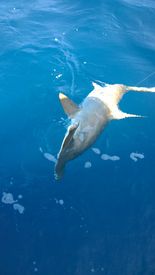 On Monday, we fished with some very nice people from Minnesota and started on the reef a little south of Port Everglades Inlet. Conditions were poor with no wind and no current, so we slow trolled 2 weighted goggle eyes, and 2 gogs on top. After searching for 2 hours with no bites, I decided pickup and go further offshore in search of mahi. We found them in 850' off Port Everglades. After releasing a dozen mahi and 2 silky sharks, we made the trip back to the dock with a happy costumer. 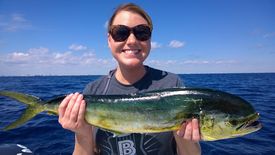 On Wednesday, Erick was vacationing from Montreal for a week and called me for a shared charter and told him I had no openings. So, on the last before going back home he decided to take the charter by himself. Before leaving the inlet, we were able to cast net some mullet and bought a dozen google eyes. We started fishing on the reef between 100' to 200' again, but after an hour, no bites. So I decided to search for mahi again, but this time we went out 18 miles and only caught a small mahi and small tuna. So I turned around and returned to 950' where we finally saw some big patches of weed. We deployed the live mullet and they got attacked immediately! Erick all excited telling me this was his first time catching mahi. We both had a blast! After catching a dozen or more in the 6 to 8 lb. range, we put out the goggle eyes and then the real action began. First a 25 lb. mahi, and then a 20 lb. mahi, and then a few more 10 lb. We also caught few silky sharks and a rainbow runner. 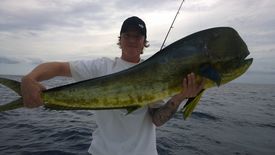 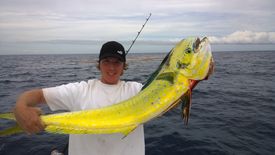 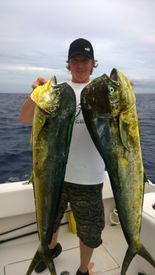 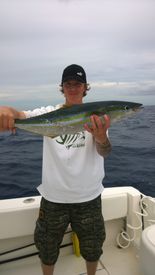 After catching all those fish, Erick was exhausted but really happy at the same time. We made the trip back to the dock all smiles and high fiving - he said it's a trip he'll never forget!