Fishing out of Port Everglades has been pretty good for the past week and I'm happy to see the presence of kingfish in our area this year. They have shown up in pretty good numbers so every trip we go out we know we have a very good chance of catching a nice king. Customers love the kings because of their long runs and lots of fight!

One trip I remember last week, we fished with Philippe and his dad who never fished saltwater before. We went north after exiting the port and set up in 120'. We had a north current and nice blue water. We flat lined live pilchards, weighted some down, and deployed goggle eyes on the kite. At one point, the bite was so good, father and son got exhausted from hauling in fish from 15 to 30 lbs. 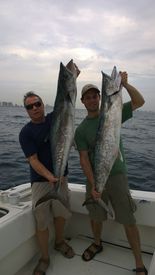 In the afternoon that same day, we fished with a father and daughter from North Carolina and the first bait to hit the water, a goggle eye on the kite, produced a 45 lb. kingfish.

This past Sunday, we fished with Phil, his son Jeff, and their friend Jared - all from Connecticut. Phil, who fished with us in the past, decided to come back with us. They all caught nice fish and again we had some action on the kite, weighted lines and flat lines. We also released a nice hammerhead for Jared. 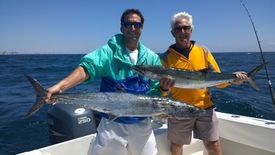 This time of year the big blackfin tuna are starting to show in our waters. On Saturday, we caught one at 32 lbs. We also did a late afternoon trip on Tuesday and caught one at 35 lbs. plus a few kingfish, a cero mackerel, and released a sailfish. 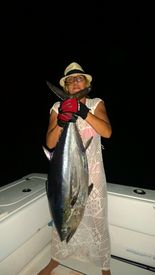 Wednesday morning we fished with a group of firefighters and caught another nice blackfin on a kite bait. We also caught a few nice kingfish on weighted lines with pilchards. 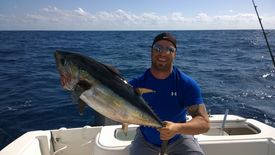 In the next few weeks, we should see more blackfin in the area! They are fun to catch as they are very good fighters, and they're also good to eat!