We had some good trips lately with trophy size fish. We've had some first time sailfish catches and a good variety of fish for our customers. The weather has cooperated with some wind to fly our kites.

On Thursday, with a strong northwest wind, we ran to the Steeple and started in 100'. There was no current but the strong wind was pushing us deeper so put out the kite with 2 goggle eyes, 2 flat lines and 2 deep lines. When we reached 200' we encountered a nice color change and all our baits got hit. We missed both on the kite, but we we're able to get a few mahi on the 2 flat lines, a silky shark and a nice 40 lb. kingfish on the deep line. 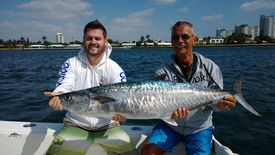 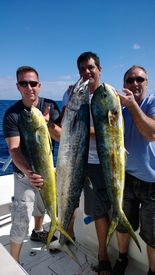 On Saturday morning, we fished again by the steeple between 100' and 200', but with not enough wind to fly the kite, we had to power drift. We circled the area and caught 2 nice dolphin on the kite, some small kingfish on the deep lines, and later, a nice 38 lb. kingfish on the kite for Carlos Arbocco. 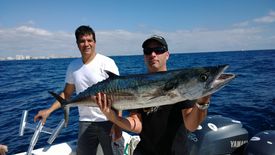 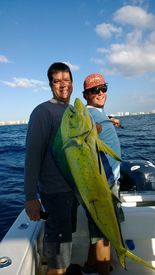 In the afternoon, we fished with a different group and decided to go in the same area where we've been catching some nice fish, so we set up and again used the engines to keep the kite in the air. After a few minutes, one of the deep lines got hit and a sailfish start jumping - Karine Blouin of Baie Comeau, Canada, caught and release her first sailfish! At the end of the trip, Karine said this was the trip of a lifetime!! 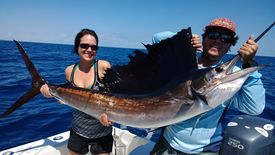