Fort Lauderdale fishing the last few days has been either good or slow. With no wind to fly the kite, and no current, we slow trolled our live baits with a spread of 2 deep lines and 2 flat lines. On recent trips, we've been fishing around the Port Everglades Inlet. On Wednesday, we fished with Leo, but he was unable to close the deal after hooking a nice sailfish. The spindlebeak spit the hook after some nice tail-walking aerobatics. On Sunday, Leo returned for round two - this time he would not be denied. Leo and his party managed a doubleheader on sailfish right in front of the inlet, in 140 feet of water  both fish took live pilchards on weighted flats lines. 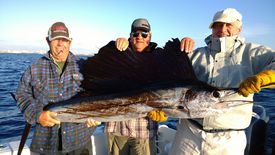 On Monday, again with no current and a very light breeze, we were only able to fly the kite for a very short time. The kite time produced one big bonito. So I decided to drop some live goggle eyes on wrecks in 200' to 250' in the area. The first bait dropped produced a mutton snapper. The second bait produced a nice 28 lb. cobia for Richard Barry. 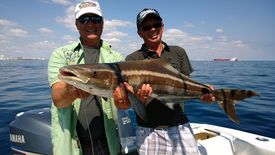 March is usually a good month so come with us and you can catch a fish of a lifetime!