Fishing near Fort Lauderdale remains slow, but we do have some very nice weather. The deep blue sea is flat calm and not much current to speak of. Our customers love it, but it makes for very tough fishing. We've been fishing north for the last month, but for our last 3 trips, I decided to fish closer to home around port Everglades.

On Monday, we had no current so I decided to slow troll live bait. We put out a spread of live pilchards and goggle eyes and started slow trolling north of the inlet in 185'. The weighted flat lines soon picked up a nice 15 lbs. bull and a 12 lbs. cow dolphin (AKA mahi-mahi) - a double header for 14 year-old Eduard and William from Canada. Later, William (dad) caught a few kingfish and we also caught some small blackfin tuna. 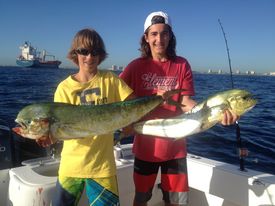 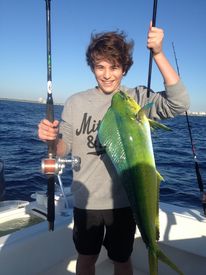 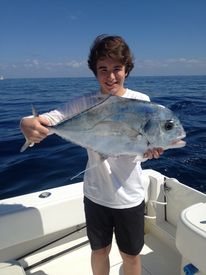 Tuesday, Gary and his son Sylvain who fish with us in the past in rough seas were happy to see a flat calm ocean. In the morning, we fished south of Port Everglades Inlet. It was the last hour of the incoming tide and the kingfish where biting pretty good. We had a number of cut-offs, but we were able to catch 5 kingfish. 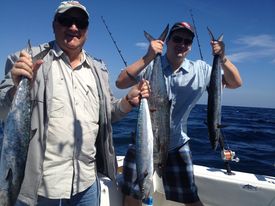 On Wednesday, we fished with Leo - a regular customer. We fished south off the inlet, but this time we had enough wind to put up the kite. We started a drift in 185' with a good north current. The spread included 2 goggle eyes on the kite, a few deep rods and some flat lines on or near the surface. When we got to 140', a sailfish took one of the kite baits and was jumping like crazy. After a short battle, he spit the hook. After that, we moved south and started a "power drift" in 140' and I used the engines to keep us at that depth. We caught a few kings, but they were small - in the 10 lb. range. Most of those smaller fish took the flat lined pilchards and goggle eyes. A much larger king then took the a goggle eye suspended from a kite. The fish tipped the scales at 35 lbs. Linda did a nice job and got the big king to the boat and everyone was happy! 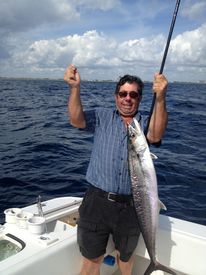 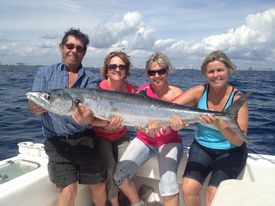 I'm also happy to see some kings in the area. We have not seen many on previous trips, but we've been catching them now!