On Friday, we fished with Tony Skupas of Wisconsin. Tony wanted to catch sailfish, so before leaving the inlet, we loaded up with 3 dozens pilchards from Julie's Live Bait and a dozen goggle eyes from Tim's Live Bait. We setup a little north of the inlet in 200' of water. Our first bait out produced a big bonito, but no other bites followed so I decided to troll north in between 300' to 400'. Trolling some small feathers on top produced half dozen skipjack tuna.

When we got close to Hillsboro Inlet, we moved in to shallower water in 250'. We caught two small bonitos and a wahoo came from the depths and cut one of our bonitos in half. The wahoo kept coming back again and again so we decided to use the other bonito as bait, but this time with some wire. Sure enough, the wahoo returned chasing and jumping and cut the bait in half again, but he missed the hook and we missed the fish.

Now it was time to setup and catch a sailfish for Tony. We started in 200' just off Hillsboro Inlet with very little current and a very light breeze. We put out 2 light wind kites with 2 goggle eyes on each kite. We kept putting the boat in gear to just to keep our kites up. Quickly, we caught 2 silky sharks - not what we were looking for - so we moved out to deeper water. When we reached 300', Tony caught is first sailfish and it was a big one. We took some nice pictures and released the fish to fight another day. We reset in the same depth and Tony caught his second sailfish. Needless to say, Tony was very happy! 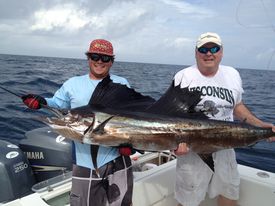 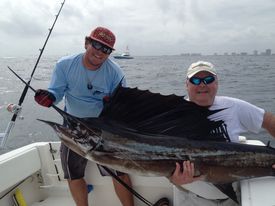 On Wednesday, fishing was very slow. We left the inlet in the afternoon with a live well full of pilchards and goggle eyes. We went straight out looking for some nice clean water but could not find anything but green water. I knew it was going to be a challenge to get a bite this day. We set up in 250' with kite baits and flat lines, but no luck. We decided to head north to Hillsboro inlet, but we still had green dirty water. We setup again with 2 goggle eyes on the kite and some flat lined pilchards. Our drift was going strong to the north and when we got to 125', I decided to keep use the engines to keep us at this depth, but still no luck. With few options left, we went shallower. When we reached the 60' foot mark, one of the flat lined pilchards got nailed by a sailfish, but he after short battle the sailfish released them self. But it didn't take long before another sailfish grabbed one of the goggle eyes on the kite. Franceline had her first sailfish within a few, all too short, minutes - her first one, a dream come true! 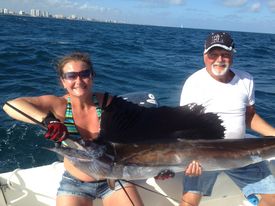 That's 2 anglers this week with their first ever sailfish - I love my job!