With rough seas all week we finally made it out Friday afternoon with Barbara Jeauneau and Herve Saincourt of Saint Pierre de Peary, France. They waited 3 days for the sea to subside and Friday was there last day in town so we decided to go.

The boat was loaded with plenty of pilchards and a dozen google eyes I bought earlier in the morning. We pointed the boat towards the Steeple and began trolling the planer and surface baits, but no baits the whole way there. Once there, we switched to live bait and set up in 250' - google eyes on the kite and flat lined pilchards. The wind was at 15 to 20 from the south and our drift was northerly and a little inside towards shallower water.

The first 2 drifts produced no bites. On third drift, we set up again in 250', but this time closer to Hillsboro Inlet. When we reached 180', 2 of the flat lined pilchards got it and Herve and Barbara where having a blast when they saw 2 beautiful Mahi make multiple jumps. On our next drift Herve also caught a nice 25 lbs. silky shark, a bonito, 3 small blackfin tuna and a skipjack tuna! 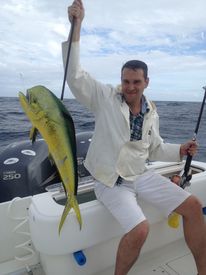 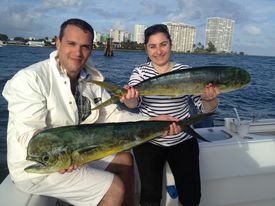 Despite the rough weather, we had two very happy anglers as we motored back to Port Everglades.

This morning we had beautiful South Florida weather. We fished with a repeat customer from Montreal, Canada, and we were hoping for maybe a wahoo since it's only a few days before the full moon, and we had an outgoing tide. So we trolled strip baits on the planer and on the surface for an hour, but only saw some tuna and bonito caught on the surface baits. So we stopped by the Steeple and put out our spread in 250'. When we reached 200', we missed a really good hit on a deep google eye. Later, in 100 feet, we caught a nice cero mackerel on a pilchard flown from the kite. On the next setup, I tried to keep us at 200' on a nice color change. As we got closer to Hillsboro inlet, we got a coupe hits on the flat lined pilchards - 2 nice mahi. They were about the same size, but after a few jumps, we lost one. Here is the nice one we were able to put in the boat! 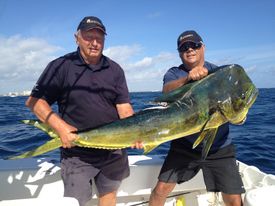