Our first two trips of the new year produced sailfish! On Friday the 3rd we had trip with Daniel Pelletier and his son Tommy from up north. Unfortunately, there were no bait boats in the area and we were unable to buy bait. Since this was a last minute trip, we were down to just a few seasoned baits in our pens - 10 google eyes and 6 pilchards.

After going through Port Everglades Inlet, we setup to the north in 250'  there was a good north current. Conditions were near perfect, but the first hour did not see a bite. So, I moved north by the steeple and started a drift in 300' with 2 google on the kite and some flat lined pilchards. When we reached 250', a sailfish came up on one of the pilchards and took it without too much hesitation. This sailfish was Daniel's first one ever! Very happy with his catch, we took some pictures and released the billfish. 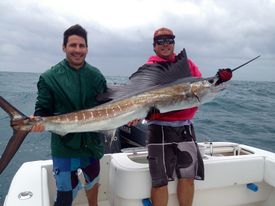 We had drifted near Hillsboro Inlet and we set up again, but this time in 200'. With bait running low, we flat lined 3 pilchards and 1 google eye. This time 125' was the magic depth where we score our second sailfish - this time for his son Tommy. All proud and happy we headed back home to Port Everglade with a happy father and son!

The next day we fished with another father, son team. This time we left in the morning and there were plenty of bait boats in the inlet. We bought a load of pilchards and google eyes. This day we started on the troll north hoping to get something for diner. After an hour of surface baits and planer baits, we saw no action.

With some really nice blue water near the Steeple, we pulled out the kite setup for a drift in 300'. The wind and current worked to push us mostly inside. When we reached 95', we got a sailfish double header on the kite google eyes. We lost one just moments into the fight, but we were able to catch and release the second sailfish Fred Ducharme, of Canada, his first sailfish ever. That made it 2 days in a row for father and son first sailfish! 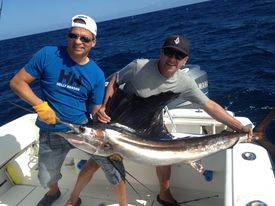 Also to report this new year, Capt. Kevin was over in Bimini, Bahamas to do some high speed trolling and caught some nice wahoo in the 50 lb. range! 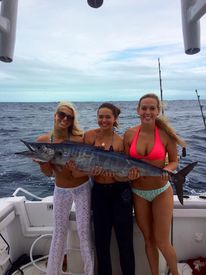 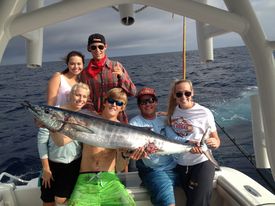