The wind has certainly begun to blow this season, but we are still doing pretty well with Mahi. On Sunday afternoon, we left Port Everglades Inlet with a load of live pilchards and a few goggle eyes. Our plan was to target sailfish so we headed out to 350', a little north of the inlet, and set up 2 gogs on the kite, 2 flat lines and 2 weighted lines.

With the wind around 15 knots and nice blue water, it didn't take long before we hooked up with a nice sailfish on one of the weighted lines. Our angler, Erick, was ready for a battle, but that beautiful sailfish was able to throw the hook after a few jumps. Later, Erick tangled with a skipjack that hit one of the flat lines with a pilchard. He also landed a Mahi that eat one of the goggle eyes flown from the kite. 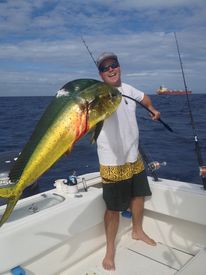 We repositioned the boat for another drift over the same area. Again, we caught some skipjacks on flat lined pilchards and some more mahi. We also missed 2 successive kingfish attacks on the kite baits.

You what they say, never leave fish to find fish... So we setup for a third drift over the same area and were rewarded by more skipjack action and 4 more nice Mahi! 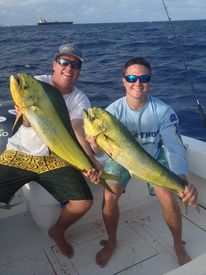