Crossing from Ft. Lauderdale to Bimini and Cat Cay, Bahamas

On Tuesday the 14th of May we got ready to cross the Gulf Stream to fish in Bimini for a 3 day trip with a group of people from Wisconsin. With rough seas around 4'to 6' I had no choice but to cross and be ready to fish the next day! Before I Left I loaded the boat up with 10 boxes of chum, 3 boxes of silverside Minnows 5 lb. each, 6 dozen frozen ballyhoo, 8 boxes of squid 2 lbs. each and brought 5 dozen live pilchard before leaving the inlet. 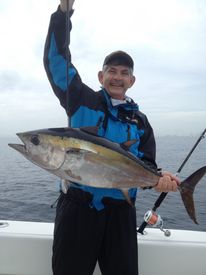 Wednesday we got to fish with Tim Gantz of Wisconsin (1st time blue water fishing for him) and his friend Tim Lucke a repeat customer also from Wisconsin. With the wind at 10 to 15 knots that morning we decide to start trolling south to hammerhead, our spread was simple 4 small lures - 2 pink and 2 pink and blue. We started in 300' in search of birds going south and towards deeper water.

With no birds in sight by the time we got to Cat Cay we were in about 1200' of water and we saw lots of flying fish. To our right we see a blue marlin at an estimated 200 lb. - we're all excited! He came in behind an Looked at our lures twice but was not interested, so we kept going and 10 minutes later our 2 short lines got hit (double header sailfish) their first ones for Tim Gantz and Tim Lucke! Very happy we took some quick pictures and released both sailfish healthy. 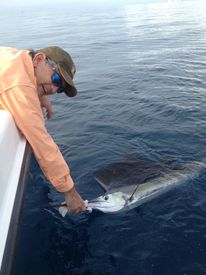 After no more luck trolling we decide to run the last 6 miles to our destination and anchor in 75' and put out the chum bag, 10 minutes later we started catching nice size yellowtail snapper on cut pieces of ballyhoo and silverside on 1/4 oz. jigs and 25 lb. fluorocarbon leader. We also caught some big cero mackerel and lost some fish to a shark! We also put live pilchard on the kite and caught a big 38 lb. kingfish, after a good day of fishing we headed home to Bimini Sands Resort. 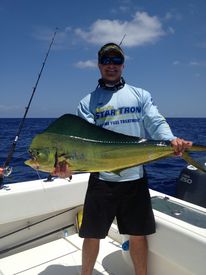 Thursday morning, with a good north east 15 knot wind, our customer wanted to fish right up front so we go out started trolling north and caught 2 nice blackfin tuna and 1 skipjack tuna in 250'. Not long after that they ask me if we can turn around and fish up front away from the wind so we did and anchor in 80' but with the current between 3 1/2 to 4 knots we had to change our plans. With a customer worrying about getting sick we trolled small feathers right up front in 250 ' and caught more blackfin tuna and skipjack tuna . Around 2 o'clock they said we did well! Can we go visit on the island and I brought them to big game resort and went for a drink on the second floor, and enjoyed the view and we were prepared a nice plate of fresh caught sushi! Life's always nice in Bimini! 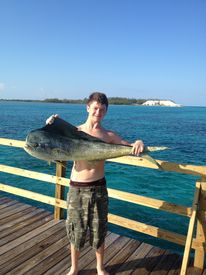 On Friday the last day of our charter we went north again and fishing with the same guys we fished the first day in search of Mahi and tuna. We trolled the same lures we caught the sailfish with couple days before in anywhere from 500' to 1200" we saw weed but no Mahi and no tuna so after a couple hours of trolling we almost made it to Great Isaac.

On our way back to our dock at the Sands Resort we spotted some birds and caught 8 nice sized blackfin tuna and a few skipjacks. With some very happy customers we decide to run the last 10 miles to the dock. What a great 3rd day of fishing with some very nice people from Wisconsin!

Saturday we stayed in Bimini and took a day off. On Sunday we came back home to Ft. Lauderdale and me, my son and his friend decided to go around Isaac and do some deep drop and get some yellow eye snapper, after catching 12 nice sized ones we decided to look for Mahi and found a rip with some weed and caught 16 Mahi all from 8 to 15 lbs. and decided to head home after a nice trip in the Bahamas!

Back home for a few days before going to Bimini again on Thursday for memorial day weekend, so back home we go out on a late afternoon in search of black fin tuna , with rough seas we headed out of Port Everglades and fished around the whistle buoy for about 45 minutes put out 4 flat lines with live pilchards and caught a nice 25 lb. blackfin tuna and came back in.

On Thursday morning, we were on our way to Bimini, but this time we are aboard the 61' Viking; our destination is the Big Game Resort and Marina on North Bimini. After clearing customs and immigration, we decided to deep drop at ginger bread for some beautiful Yellow Eye Snapper. After only two drops we had enough yellow eye snapper for dinner. Having some pilchards on board which were bought in from Ft. Lauderdale, we decided to look for birds and try to find some tuna. Not having any luck locating the birds we got lucky and came across a patch of weeds and a floating barrel. After the lines went in near the weed patch we pulled in 12 nice sized mahi-mahi all around the 10-15 lbs. range, a few triple tail and 15 lb. blackfin tuna, all were caught on small spinning outfits.

The next day, we ran over to Hammerhead and in no time we're anchored at the same spot we fished at the week before. Chum bags went out as soon as possible and in no time we caught about 30 nice size yellowtail snapper all caught on cut ballyhoo and silverside. At this location, we also caught some nice cero mackerel, amberjack and a shark. On our way back to the dock we noticed it was a full moon and decided to give it a shot at high speed trolling for wahoo. Thirty minutes went by while trolling and we got a hit in 275' of water just off of Cat Cay, the hit turned into a catch and we pulled in a nice 15 lb. wahoo. 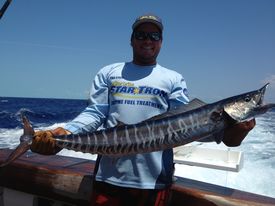 The next couple of days we spent relaxing and deep dropping right out front of Bimini staying out of the stiff north breeze hoping to catch some mutton snapper. Anchoring up in 90' we put out a Chum bag but we were not able to keep bait on the bottom due to trigger fish, we called our friend who was anchored north of us asking if the trigger fish were affecting him, his answer was yes. 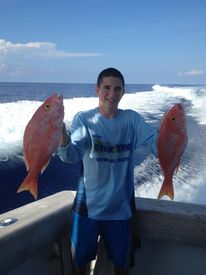 We decided to wait it out for a few and then the fishing became active. We caught an amberjack a few cero mackerels and finally caught 2 nice mutton snappers at about 10-15 lb. on dead sardines. The highlight of the day was when we landed a 70-80 lb. amberjack on conventional tackle, 20 lb. line with a 40 lb. leader and 7/0 circle hook. It was a major battle but after about 30 minutes we brought him in and both we and the fish were exhausted. Going Home on the Star Brite we looked back and that 70-80 lb. amberjack was easily the fish of the week. 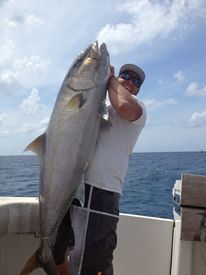 Back at home in Ft. Lauderdale just after Memorial Day we experienced lots of strong wind and stayed at dock until this recent Monday (June 3). We went out on the 31' No Vacansea Contender. Loaded with Pilchards bought from within The Ft. Lauderdale Inlet we started to fish near the Whistle Buoy in about 200' of water. After a few moments with no wind and no current we decided to slow troll with our pilchards (2 weighted lines and 2 flat lines) and our first hit was a nice sailfish in about 120' of water.

Moving south towards staying near Hallandale we set up again the same way slow trolling in about 185' of Water and this time pulled out a nice 25 lb. blackfin tuna. We spent some extra time on the reef and then decided to go offshore to find some mahi-mahi, with no luck we were satisfied coming back in with an ice box filled with amazing tuna dinner. 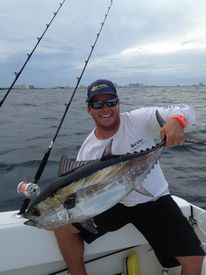 Until next time, we're getting ready for the George Poveromo's extravaganza in Bimini Next week sponsored by Star Brite. I will see you there and will get back with a report next week!