Last week's strong winds kept in port muck of the week. As fate would have it, I had customer who was here just for that week and wanted to go fishing really bad. So he convinced me to venture out of port. We planned a trip around a northwest wind  although the winds where still very strong, winds out of the northwest originate over land. So if we stayed close to shore, the waves aren't as large as they are further offshore. We anchored up in 30' and the seas were better than expected  neither flat. Alan and Michelle, who traveled from Canada, caught 4 nice red grouper and kept one for dinner. They also caught a few cero mackerel, one mutton snapper and an impressive silky shark. 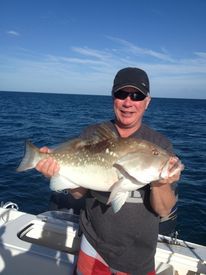 More recently, we fished with Steve Water of the Sun Sentinel. We exited Port Everglades Inlet with a load of pilchards and google eyes with the hope of attracting some kingfish. We setup shop in 180 ' just north of the inlet. With no wind and no current, we immediately set out a slow trolling spread. We trolled around a freighter anchored nearby and were able to produced 2 bonito, but no kings.

With no current to speak of and little action, we switched gears tried dropping on a nearby wreck in 220' for groupers. Wasting no time, Steve dropped a google eye down to the wreck and got hit immediately. I told Steve, "We have our grouper," but he pulled up a nice amberjack. 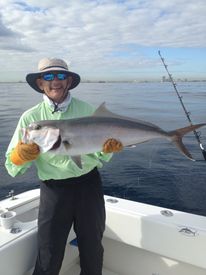 After the wreck got stingy, we did some trolling and caught numerous skipjacks tuna and 2 mahi. Lastly, we came back inside to 30' and caught a few small African pompano on live pilchards and added two cero mackerel as well. 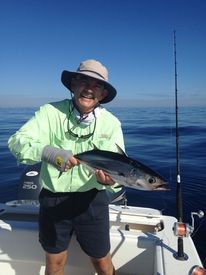